I made an evil eye glowing Bender Pumpkin!

This actually took place in 2012, but I wanted to post here since I'm proud of this little bit of craftsmanship!  I wanted to do something special when I carved my first pumpkin.  I had some friends over, toasted up the seeds and then found myself with a perfectly impressionable gourd to play with!


I started that Friday night and worked away from the left side and drilled out the grill for the teeth, but by that time I was pretty worn out and put it away in the fridge for a couple days. BIG mistake! That next Tuesday, I had already seen it start to wilt but I was determined to finish it off regardless! That is why the mouth looks a bit strange on the left side. I carved out the eyes, the right hole, and then buckled down to put together the lighting electronics!


I had already been doing some work with 555s and had them laying around. For the flashing eyes, I used the first web site to come up in Google for 'LED Tester' which happened to be an Instructables link. I put two white and a green LED in parallel together. Then with a 330ohm resistor in series with the LEDs, I just soldered it all across the terminals of the 9v battery I was using and that gave off great light on its own.


The last finicky part was getting the red LEDs to stay behind the eyes, all I did was put indentations in the flesh of the pumpkin for them to sit in. I covered the board with some tissue paper to hide it and improve colour, and Voila! My own scary Bender in a pumpkin!

To see all of the images from this project, check out my Picasa Web Album!

Four batteries are used in stead of just one internally for this old APC backup power supply.  A basic plastic terminal block was picked up from a local commercial supply store, as well as 14-2 wire.  The wire's insulation was a bit thick to fit inside the terminal block slots, so I had to trim it out a bit. 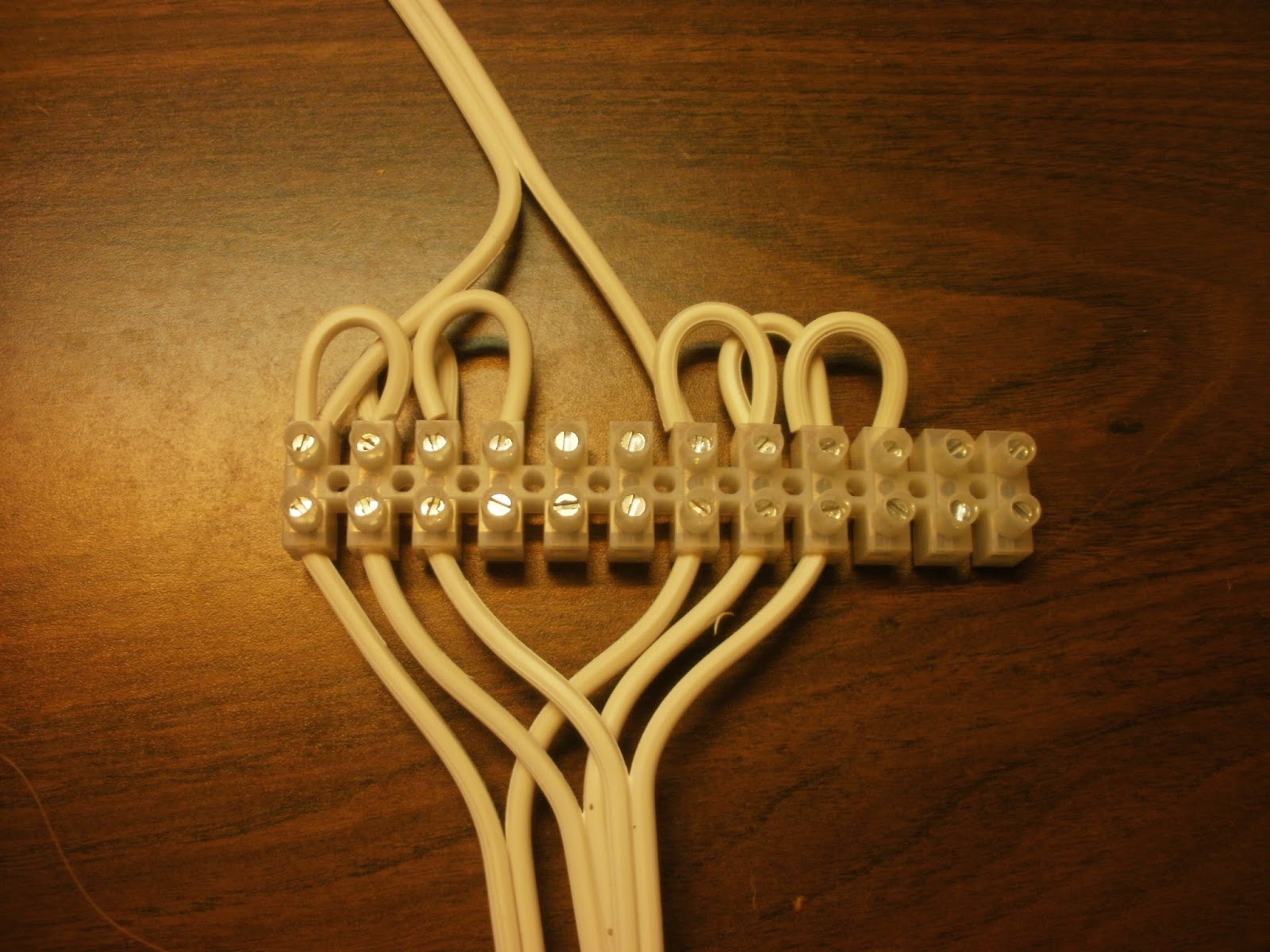 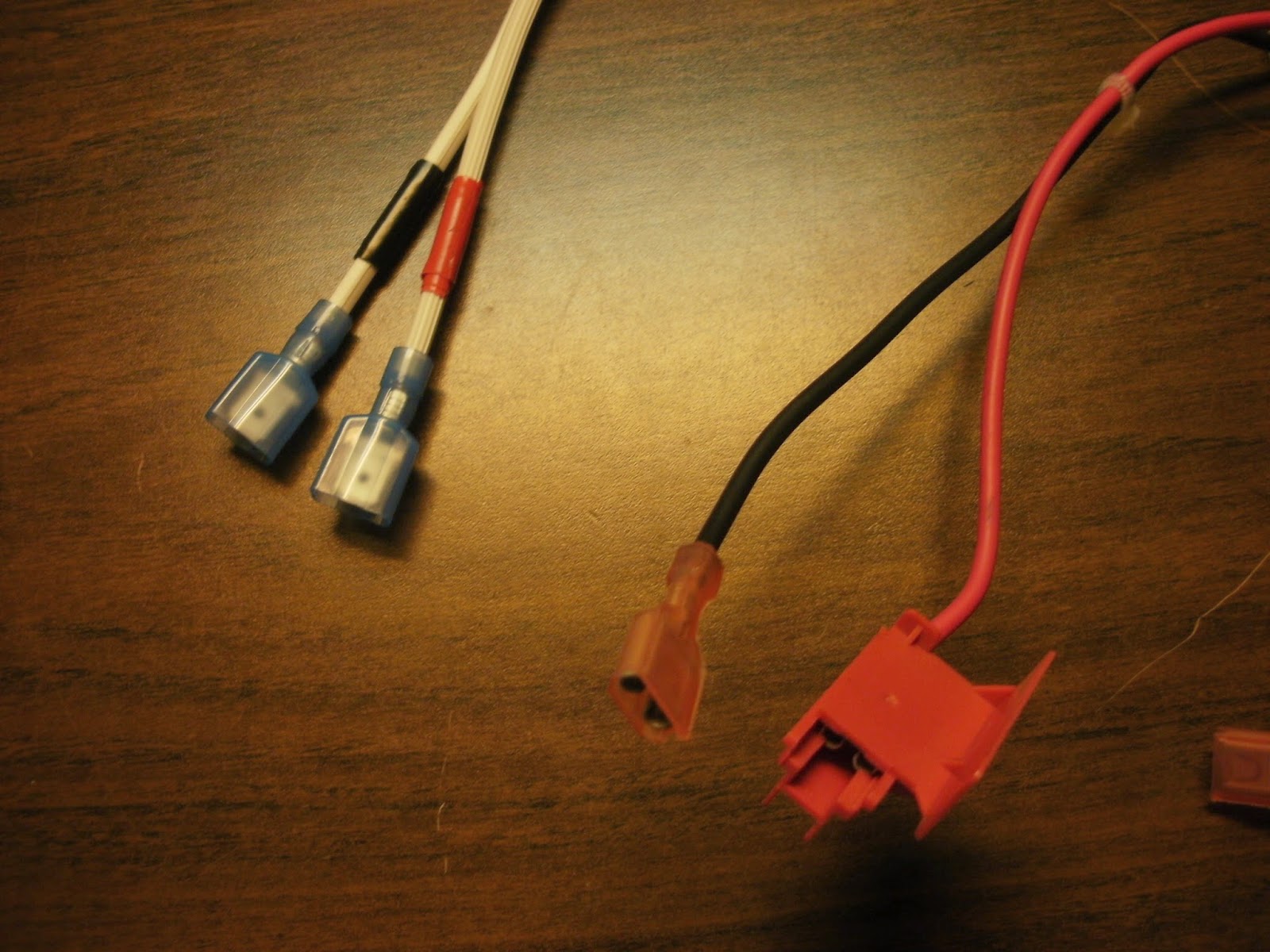 Not shown in these first pictures, but observable below, there are four lead outs in total, not just three.  There were some procrastination issues on finishing off the build in one weekend of just absently trimming wire leads and crimping ends. 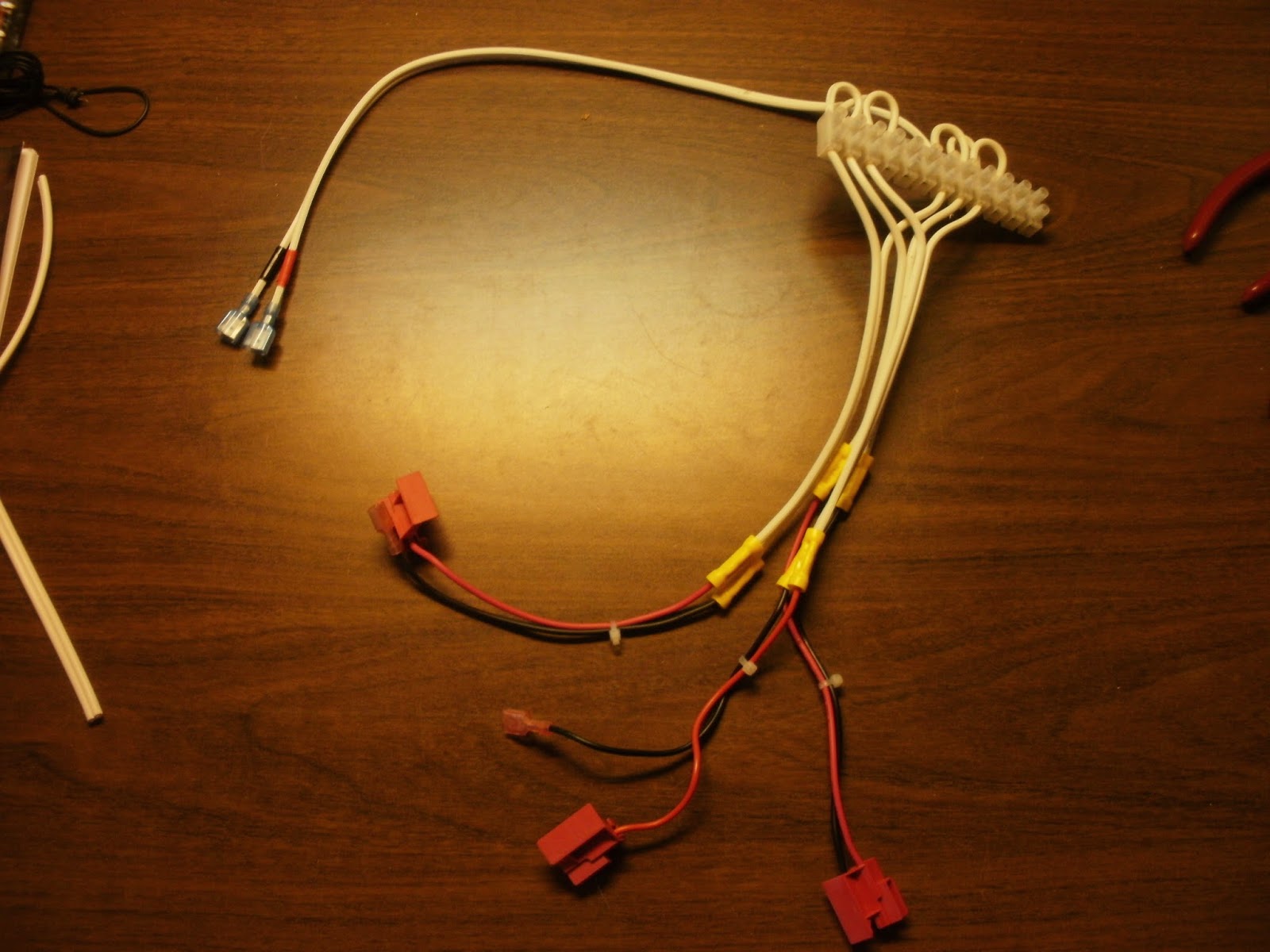 Overall, the four battery rig will run my fluorescent overhead desk light for little under twenty four hours time.  I hadn't been in the room for a while when I noticed the juice left out after testing.  The original specs for the UPS indicate that it is designed to provide a late 90s / early 2000s computer power for about eight minutes, enough time to save documents and power it down.  My light would require significantly less then that, but I do not think it lasted for more than six hours on just the one battery alone. 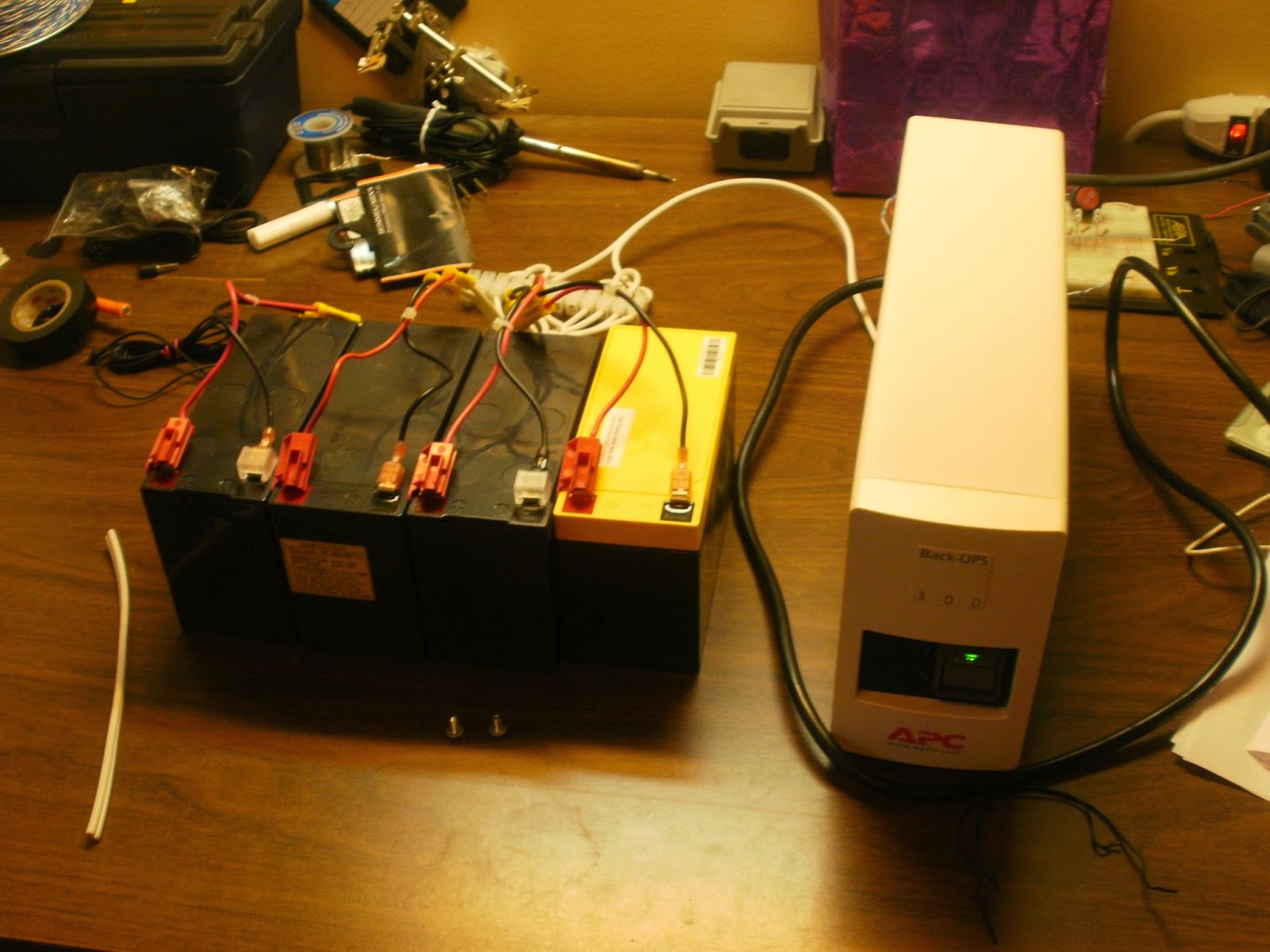 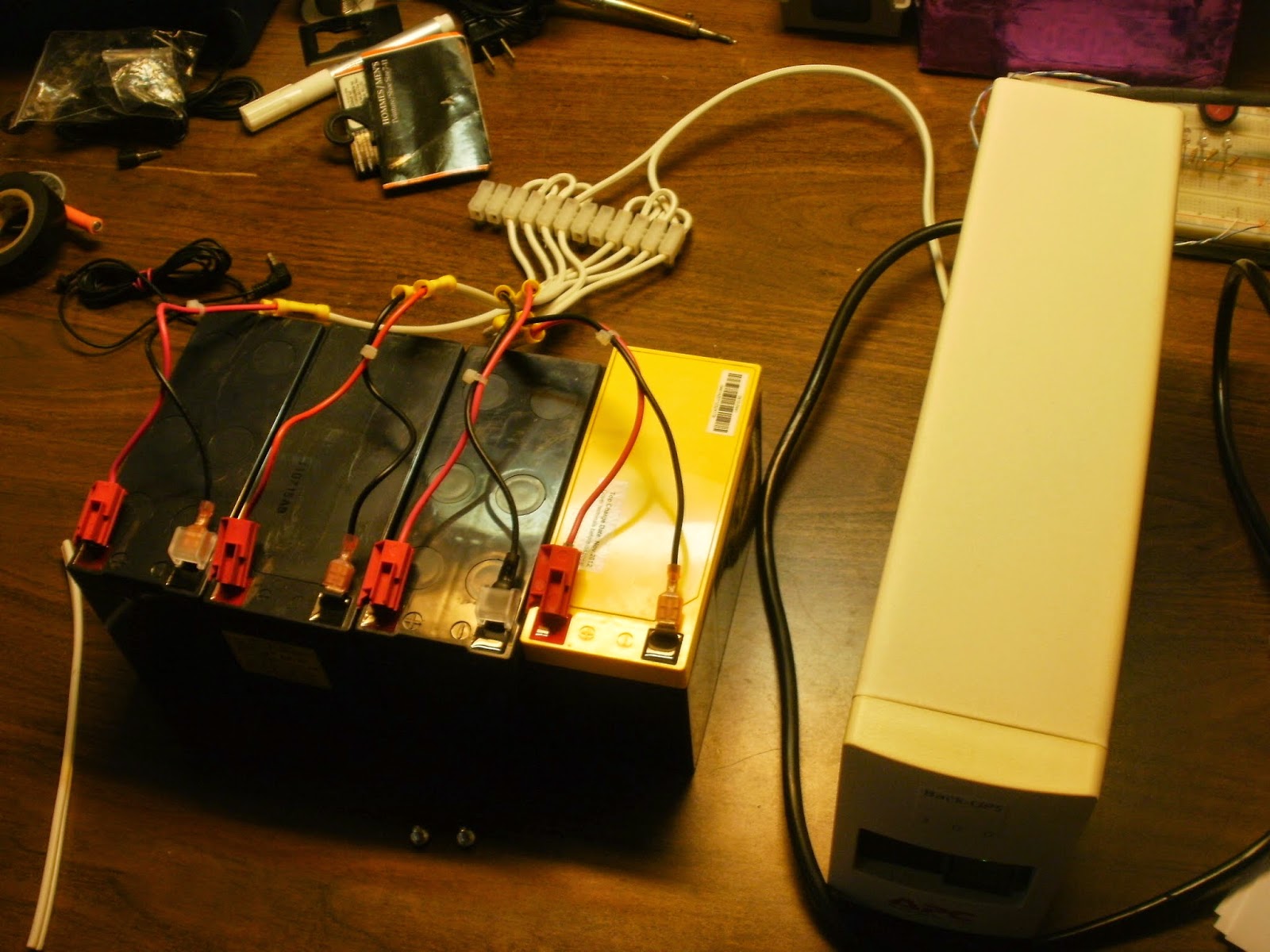 Nice little experiment, but I'll probably put the UPS back to only one battery and enclose it as manufactured.  It works very well in a portable fashion when it can just be unplugged from the wall and carried around.  While it will only supply 3W of power, that's more than enough for phone chargers, lights, or the like.
Posted by Tim S. at 2:29 PM No comments:

After all the time and pictures, the guitar is bust and isn't playable.

I was able to get the neck attached and into a good shape.  Some wood glue and pressure was all I needed for it to span well.  I brought it down to the local music store to get some strings and tell them about my project. 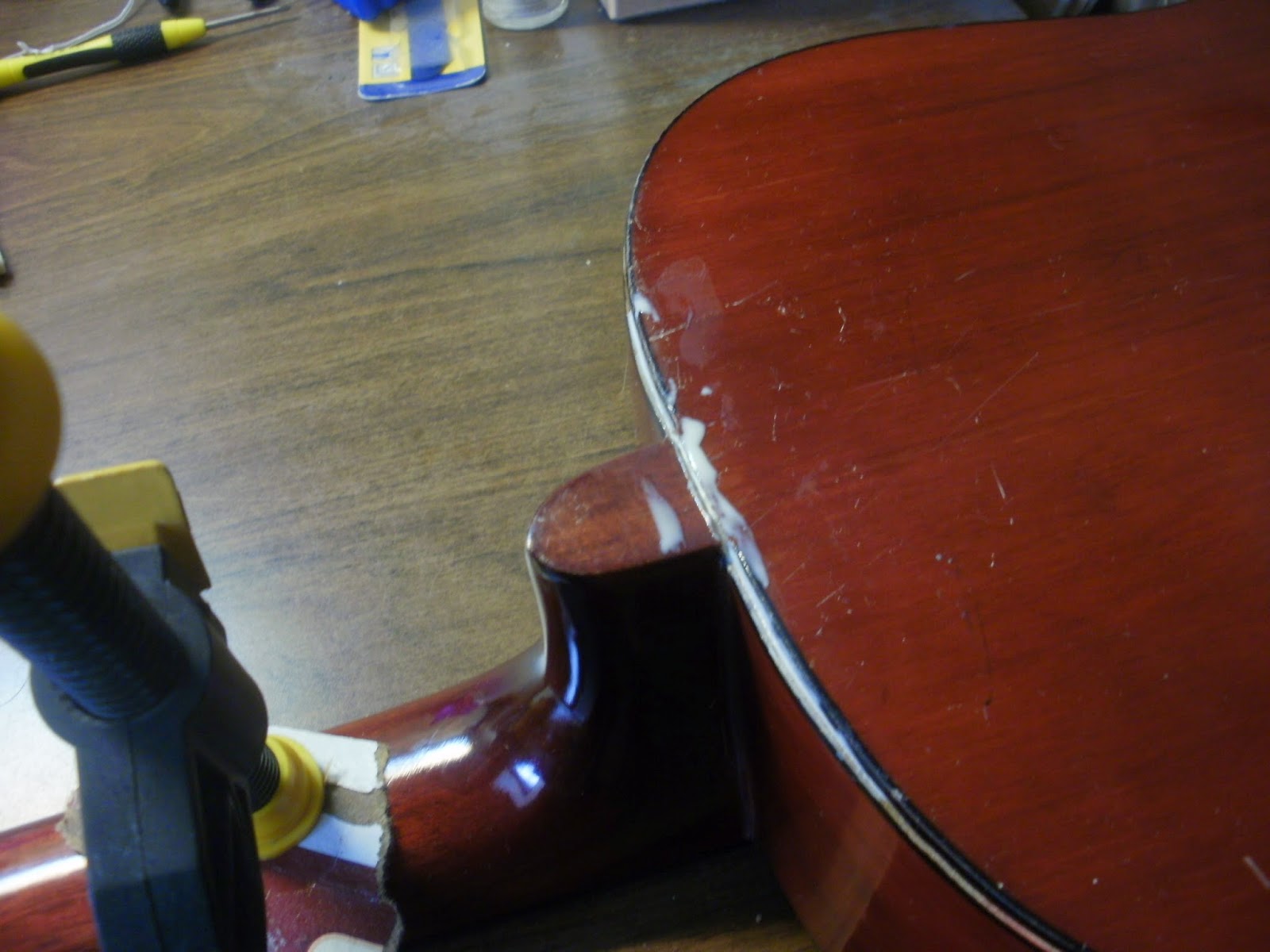 On Saturday, the store had a promotion where with the purchase of a set of strings, a free setup was performed on the guitar.  On the first string, once it got up to tension the key snapped off.  Another key started to crack and spun uselessly. 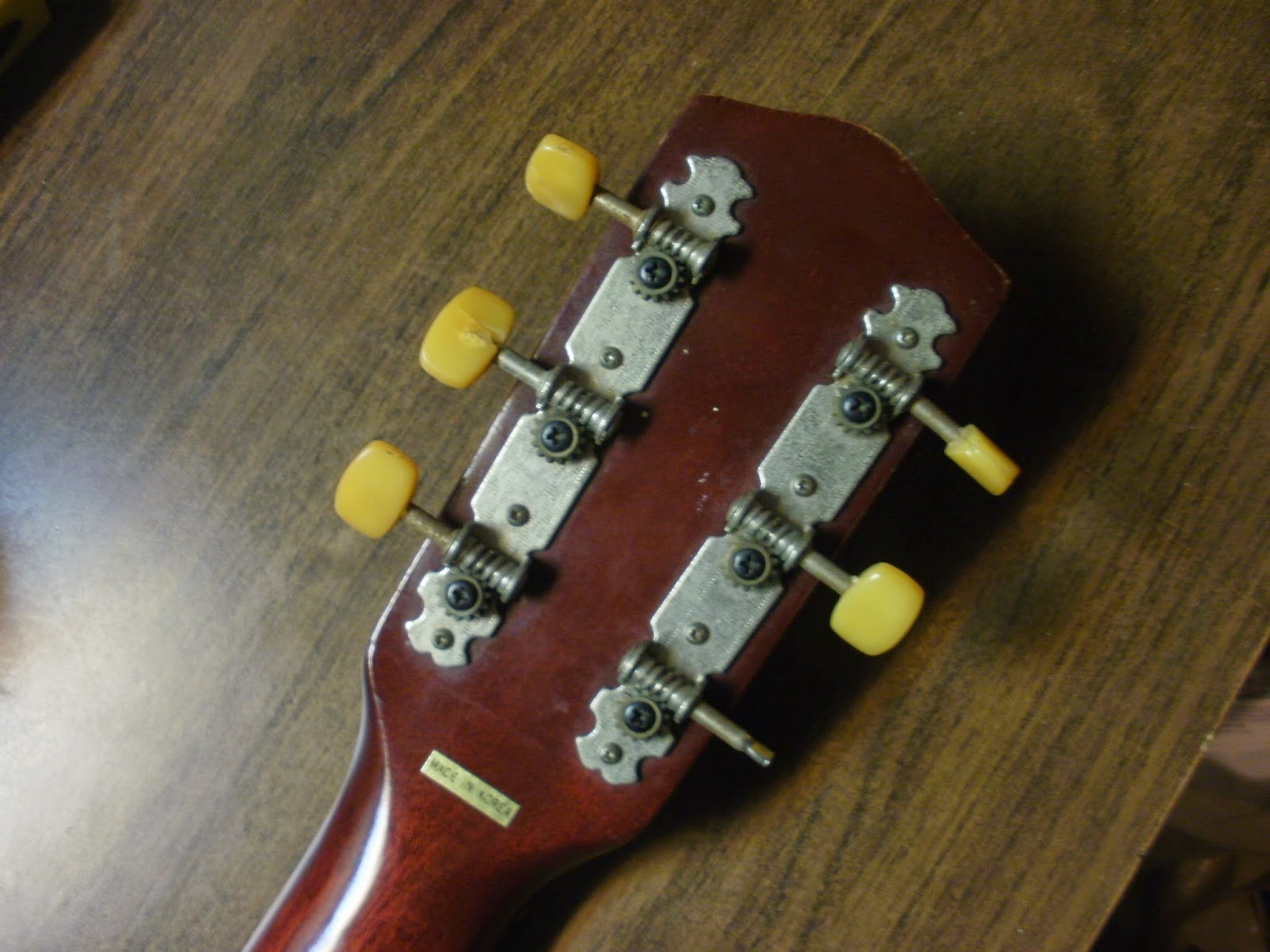 So for a good few weeks, I found an old guitar which may have been able to be worked into something usable, but ultimately, not.  It was fun working to get the straight shape back in the guitar, and I learned a bit about the make up of a guitar. 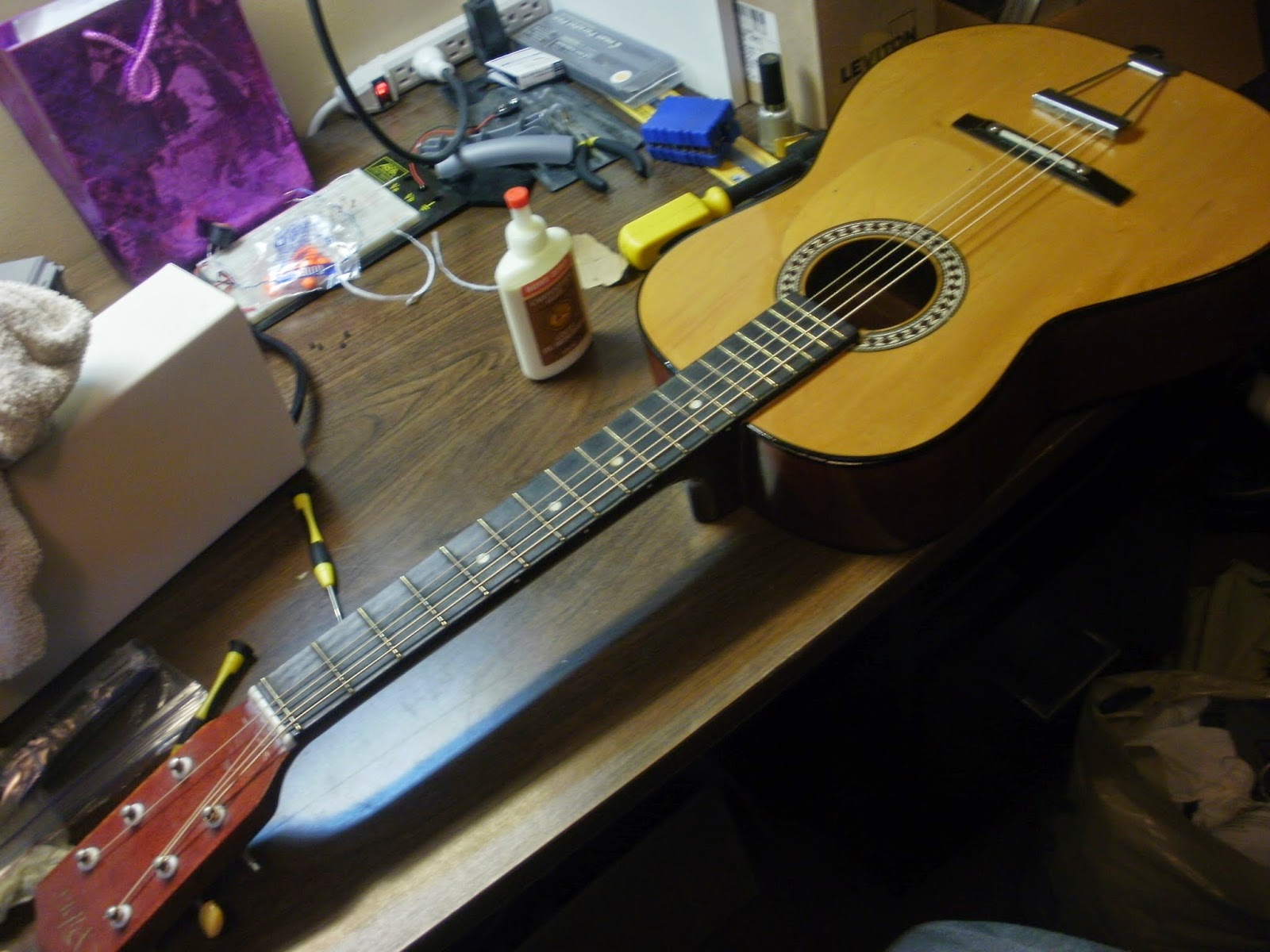 I was suggested to make a percussive instrument out of it.  That would be neat, and it would be another use for it, but for now it's just clutter and junk.

More with Unity; Animation in Blender

I've been looking at tutorials and more Unity content on the web, and that brought me back around to Blender.  I've tried this tool in the past, and while it looks amazing, I've never really gotten into it.  Going backing to browsing Unity material, I found a neat tutorial demonstrating the character model creation, skinning, and animating process.  It was pretty fun!  Took me several days to work it through, but I ended up with something I'm giddily proud of!  I should note that the author was pretty quick to answer some questions of mine, as well.  I was surprised at how recently this tutorial series was put out as compared to when I was looking for it.

The model was made in Blender, and then a map of the geometry was created.  I used GIMP to 'colour' in the map the way I wanted the skin to look, and then loaded that image back into Blender to apply to my model.

There are other steps including making and rigging a skeletal system which aren't shown, but I have included two images of the final piece, as well as a download link for the 'game' demonstrating the animation!

As like the previous Unity post, if you download and run the program, use alt+F4 to quit!  Or use the x if running in Windowed mode.

Yesterday, Monday, I took the clamp off the guitar after sitting for a couple days.  I heard lots of small crackling as the wood released from the tension of the clamp.  It didn't splinter, but I probably should have soaked it before letting up the pressure.

After cleaning it up, I set to wetting the neck for another six hours, and then put it back to straightening it down on the desk. 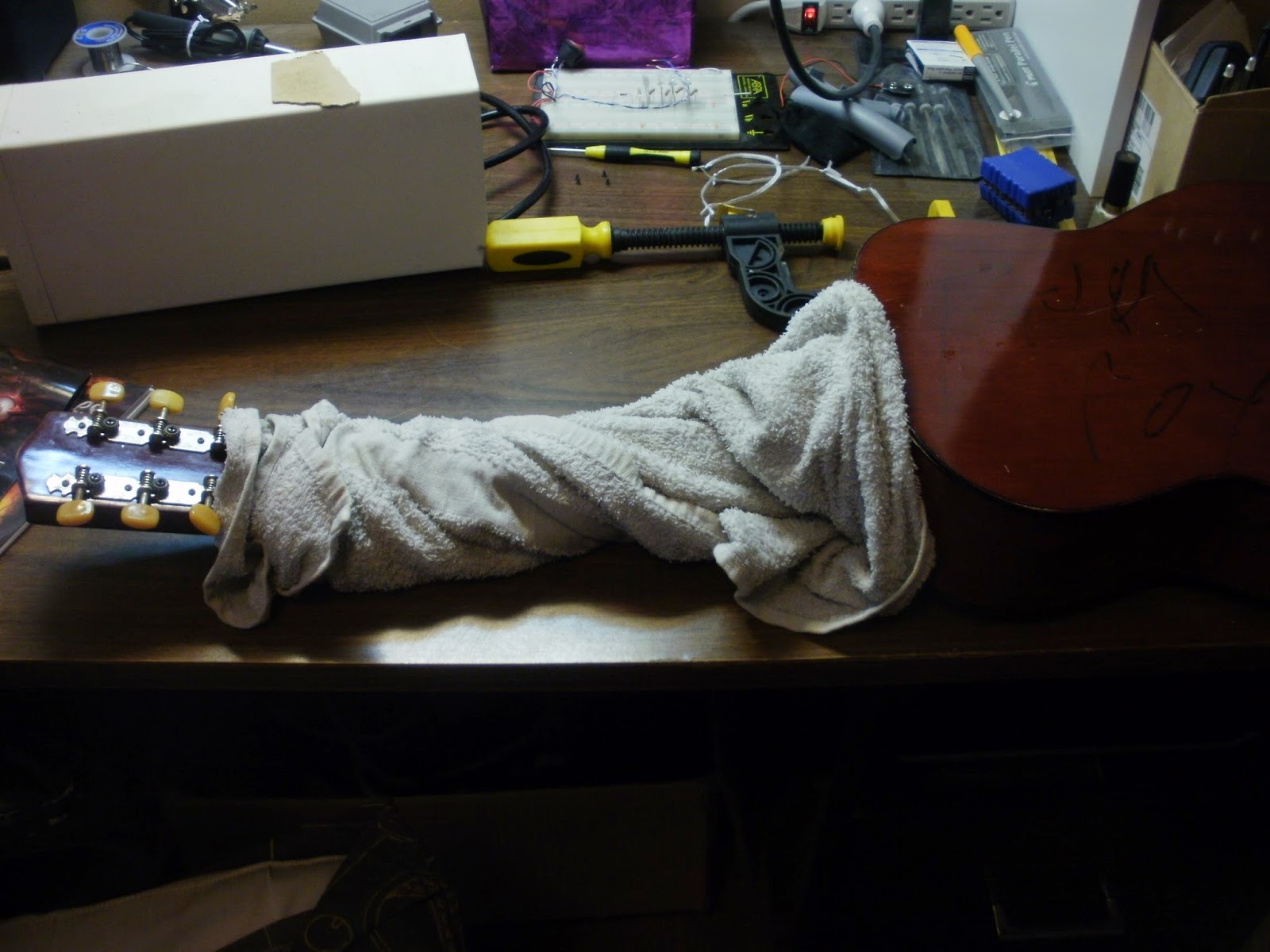 Not much happened to report on this post.  I did notice that after the soaking, I could lift the body up and meet the heel of the neck where it had separated from. 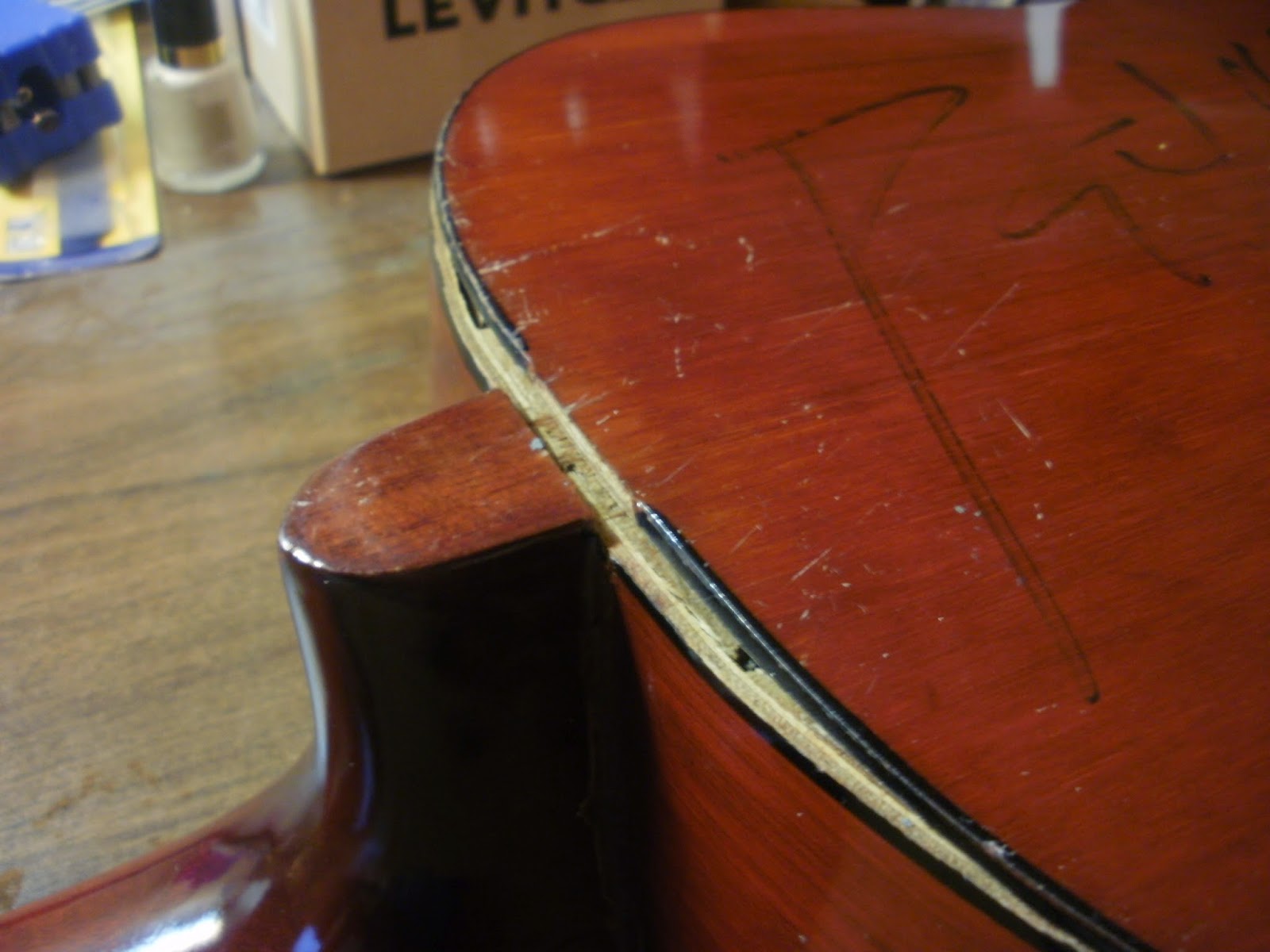 What a friend of mine had suggested is I could drill a pilot hole through the heel into the support of the body and a wood screw should keep it together.  I'll definitely do this once I make sure the warp in the neck has straightened up some, so maybe by next weekend I'll try it out!  Looks like I have some direction to take this in that will speed up the process!

As usual, any ideas or suggestions appreciated!
Posted by Tim S. at 5:45 PM No comments:

Today I made a functioning program with Unity!

It's very simple and glitchy, but I got the gist of it!  Imagine that you are a box, and as that box, you are able to roam around the land of North America, only drawn out as a Pokémon world map!  I wouldn't say it's an Easter Egg, but I made some activity up around Greenland.


Let's see if a download will work!  Alt+F4 to exit 'cause there's no other way to close!

Today is Wednesday and I've been mostly letting it sit under clamps since last post.  Yesterday, Tuesday, I took it off for three hours to wrap and soak before putting it back down under a tighter pressure.  I also moved the body up to be pressed against the edge of my desk.  This allowed it to press closer in to the heel of the guitar, which I think is the biggest cause of the bowing.  Damage can be seen in the previous posts's pictures, but I took another to show how the neck had been pulling away from the bottom panel of the body while laying forgotten.


Against the desk, I tried to get a couple shots to show the position the neck is in, and also to show that the body is being pressed up, effectively being 'bent' back in to meet the neck where it should.  After several more days ( weeks? ) , if it looks to be staying less bowed, I'll glue the bottom panel closed and that should take care of the most severe warping!


There maybe not be many posts for the next couple of days since it will mostly consist of waiting.  Any suggestions or ideas are welcome!  Feel free to comment below!
Posted by Tim S. at 2:58 PM No comments: